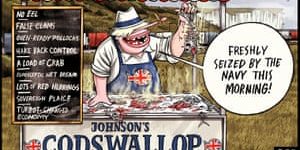 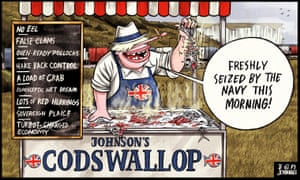 Generally I see myself as being up to speed on the global fishing industry. But I seem to have dropped the ball on Brexit. The family business, Hanselman Brothers, was started in 1908 in the North East of England. At that time, the North East fishing industry out of Hartlepool and North shields, Newcastle, was a thriving industry. After the Second World War, the North Sea was a huge fish resource, having been revitalised during the war. But this ‘resource’ has been decimated over the last 50 years and those once thriving ports no longer operate.

There was always fighting over the North Sea ‘resource’ and previously I commented on the Icelandic Cod Wars. These were a series of disputes between Britain and Iceland, running from the 1950s to the 1970s, over the rights to fish in Icelandic waters. Although it was never a war in the conventional sense of the word, the peak of the Cod Wars saw thirty seven Royal Navy warships mobilised to protect British trawlers fishing in the disputed territory. While the wars were eventually settled through diplomatic means there was conflict between British naval vessels and Icelandic ships out at sea. However, the Cod Wars did show how seriously nations took their fishing rights, and the lengths they would go to in order to access rich fishing grounds. Now we have another war and its in the Brexit negotiations and fishing, especially in the North sea, is at the core. And it is a fight that is looking increasingly that it could sink Brexit.

Two months ago, in the periodical Econ Life, Laine Schwartz explained some of the facts. According to their original deal, EU nations pooled their waters and then divvied up the fishing rights. Called the Common Fisheries Policy (CFP), the goal was to support the people who fish while preserving the fish population.

Now that they are figuring out Brexit, the U.K. will leave the CFP. They could instead implement their EEZ (exclusive economic zone).On both sides of the Channel, fishermen are worried

British supporters of Brexit have said they want to take back control of U.K. fishing waters. In the past, though, the UK has sold more than half of its EU quota to Iceland, Spain, and the Netherlands,

Further, at the same time, the fishermen who live along France’s northern coast depend on British controlled waters for their livelihoods. During recent negotiations, the U.K. (reputedly) proposed gradually diminishing what the EU gets over three years, ultimately replacing the quotas with yearly negotiations. The French government, however, whilst recognising that British waters are the source of one-quarter of France’s national catch replied “No deal is better than a bad deal” Meanwhile French fisherman want to compromise. The whole matter is complicated further by the British fishermen who also depend on trade and are afraid of a retaliatory response from the countries that import their catch: It is very clear to see how the fish fight could sink the Brexit deal.

So, if you are following the news, it looks like there will be ‘no deal’. Negotiations have been going on in this’ transition period’ ever since Britain  left the EU on January 31, 2020. Since then, the UK has followed past EU rules and paid into the EU budget. All this ends on December 31, 2020 and then, tariffs and border checks kick in on both sides. In the EU, British goods will become more expensive. On the British side, long delays at ports are likely as new regulations are implemented that replace free trade. In addition service providers that range from bankers to chefs could be denied free access to EU markets.

We live in and operate out of Hong Kong. Our fish supplies mainly come from mainland Europe, with the exception of some fresh from the UK. The latter, however, has slowed down substantially since Covid, mainly due to  the reduction in food service trade and of course airline supply chain constraints. So I don’t believe our business will suffer. However, this turn of events does not bode well for the industry in the UK, whatever the result of negotiations.