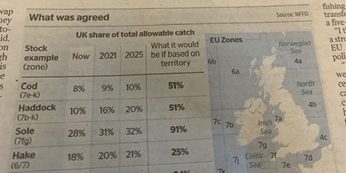 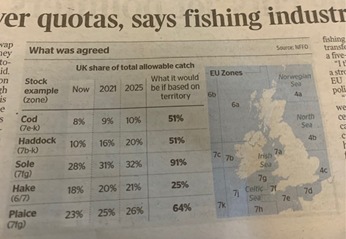 In mid-December, I talked about the Brexit negotiation/fishing industry case and possible outcomes stating that whatever happened in the negotiations, did not bode well for the industry in the UK. Well as it turned out, Fishing, whilst only a small part of the economy on both sides of the Channel,  carries huge political weight and became one of the final sticking points in the post-Brexit trade talks.

It has been reported in many news forums, including the BBC, that regaining control over UK waters was a key part of the ‘Leave’ campaign in 2016. But the deal has been a disappointment for most in the industry. This has latterly been compounded by the Covid pandemic and boarder restrictions. The cross border trade has been hammered, which is unfortunate. But on the matter of leaving the EU, one has to ask oneself why then did the majority of the industry vote for Brexit?

Anyway, let’s not go there for the moment, now that the new UK/EU agreement - on trade and so much else - has come into force, what does it mean for fishing? In a nutshell, to list the core issues ( courtesy of the BBC ) :-

Both sides have agreed that 25% of EU boats' fishing rights in UK waters will be transferred to the UK fishing fleet over a period of five years. This is known as the "adjustment period", giving EU fleets time to get used to the new arrangements. The EU wanted it to be longer, the UK wanted it to be shorter - it looks like they've met somewhere in the middle, with an end date of 30 June 2026.Under plans outlined in the deal, EU fishing quota in UK waters will be reduced by 15% in the first year and 2.5 percentage points each year after.

In saying all that, if one looks at the attached chart, is this a good deal?? Well it is probably the best the UK Govt could negotiate, but if the UK was to get what it really should get, based on territory this is a very poor deal. For instance for cod, the UK’s favourite fish for ‘fish n chips’, at the moment they are getting 8% of the total catch, this will increase to 9% this year and 10% in 2025. Based on territory it should be 51%. Actually, its dreadful. But its signed sealed and delivered now so Carpe diem as best as possible. These will be interesting days and I dare say well see a little more antagonism again between the English and French. Watch this space.